“When I saw the QUANTUM I liked it. I like innovative things. I like change,” said Patty Kiewiz, Green Bay Metro Transit Director. “When you start piecing in the savings from a liability perspective. The schedule adherences. Keeping things on time. Not having to send shadow buses. All of that comes into play.”

Chad Sobieck, a loyal Green Bay Metro mobility device passenger likes how the QUANTUM quickens the time it takes for him to get on and off the bus.

“The QUANTUM allows for quicker boarding and unboarding times. You feel like a typical passenger because you are not taking that extra time to have a driver help you to hook up,” said Sobieck. “You can just secure yourself and it takes like 20 to 30 seconds. I hope more cities start using it. I really do. It’s worth the investment in my opinion.”

Stephanie Birmingham, an advocacy coordinator at Options for Independent Living, explains how the QUANTUM has benefitted her daily travel and safety.

“As compared to a traditional four point securement system, I do prefer the QUANTUM. It’s still a much more efficient and an easier way of being secured in a bus,” said Birmingham. “In terms of the actual use of it, it is very simple and fairly seamless.”

Mike Laidlaw, the Q’STRAINT senior regional sales manager has been working with the Green Bay Metro for over 12 years and first introduced the QUANTUM to the agency four-years ago.

“When Patty became aware of the technology, the safety, and the reduction in time associated with the QUANTUM, she became very interested and wanted to pilot the product,” said Laidlaw. “The QUANTUM is completely automated. The operator simply greets the passenger, turns the system on, the passenger comes into the ADA area and with a simple tap of the touch-pad next to the wheelchair securement station, the QUANTUM self-secures and the passenger is completely set.”

“When you look at the passenger’s benefit. Maximum integrity, maximum safety, and maximum independence,” Laidlaw concludes. “It doesn’t get any better than that.” 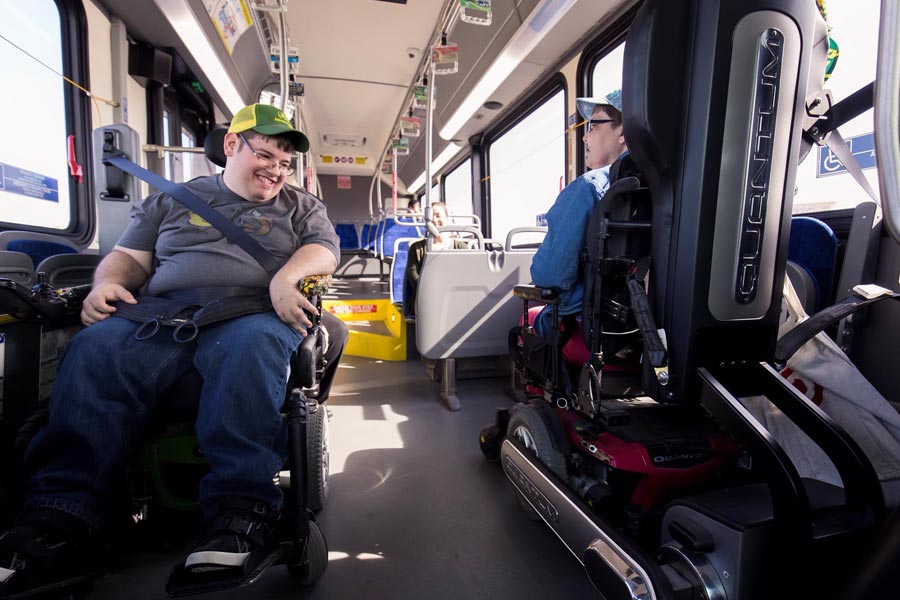